Welcome to the Dark Age Arena of DEATH!! (*thunder and lightning*), so a bit of fun we are going to have ourselves a little sport in the shape of some one-on-one hacking and slicing!

The competitors have been carefully chosen with some strict rules about who can take part (200 points and not a character). Which leaves us with a selection of monsters to watch. Interesting a couple of (sub)factions have lots of choice so we are going to first work on the finding a champion for each faction.

But first the rules, we have the coliseum for the competitors to go at each other with (18” gap between models and no terrain and 8 rounds of combat), it is set-up and ready to go!

The first rounds of DAAD! Is going to be to see who is going to be the Skarrd Champion, between the 4 Abominations and the Juggernaut

Round 1 of the Skarrd Cup in which the Blood abomination takes on the Decay Abomination.

Decay blinks first and comes rampaging forward and stops closer to Blood and readies itself for the carnage to come. Blood smelling something red charges forward with murder in mind but before it can get too close Decay lets rip with its ranged weaponry.

But whats this? There appears to be something wrong with its gun…….O.M.G! Something is really wrong, some sort of malfunction has occurred and all but blown the gun to nothing but a charred stump! Things can only get worse as Blood makes into swinging range and proceeds to cut two huge chunks out of Decay with some of the shrapnel pieces embedding itself into the skull of the Decay pilot

What a spectacular start for Blood surely there is no way back now for Decay?!

Blood continues it enraged attack onto the wounded Decay, but in its frenzy it only manages to make one telling blow onto Decay and pays for its misses with several tubes and power couplings failing due to the maniacal flailing and malfunctions.

Decay sensing a possible weakness tries to strike down Blood but its life force is slowly ebbing away and it is only able to deal a small amount of damage.

Decay desperately strikes out hoping to catch Blood out and it almost succeeds with two hits finally finding their mark the last one critically so. But it still isn’t not enough as Blood swings one last time to completely remove the Decay pilot as a bloody stain.

Round 2 of the Skarrd Cup in which the Toxic abomination takes on the Horde Abomination.

Horde ambles forward reading itself for the coming of Toxic, which comes it does but due to the distraction of the shooting from Horde there is nothing but a draw between the abominations.

Horde starts it attacks into the distracted Toxic opponent, with a few of the swings proving almost deadly to Toxic. The stunned Toxic goes on the defensive and makes some parrying blows into the Horde managing to also hand back some of the damage it has also taken.

The Masochist that is Horde decided to take its chance to enrage itself and try for more swings into Toxic. But with the enraging of itself, it manages to cause even more damage onto itself. Clearly the pilot will need replacing if it survives, it almost comical fashion with Horde writhing in its own self-harming rage Toxic cannot even land a decent blow!!

The Horde clearly has malfunction completely as it can gain control of its limbs. Seeing this Toxic advances menacing and finally puts the Horde out of its misery

Round 3 of the Skarrd Cup in which the Toxic abomination takes on the Juggernaut.

Toxic deciding to take the fight to Juggernaut, it readies itself for the beast to come forward! And forward it comes brushing aside the incoming shots from Toxic and manages to get a glancing blow onto Toxic for an explosive start to the round.

Juggernaut continues its assault thrashing Toxic viciously before clearly hitting something important and sending Toxic into a poisonous cloud of destruction!

Welcome to the final round of the Skarrd Cup in which the Blood abomination takes on the Juggernaut.

Blood not learning from its brothers in earlier rounds, moves towards the Juggernaut and readies itself for the Juggernaut! This time the Juggernaut is hurt from the shooting of Blood and the gaping wound it suffers clearly causes more damage as the pair clash in the middle of the arena!

Blood having stunned the Juggernaut in round 1 continues its attack but clearly something is wrong with the mechanical parts of blood being so close to the Juggernaut. It does manage to land some telling blows onto the Juggernaut but several systems are clearly failing and some viscous black liquid is seeping out of several rents in Bloods armour.

The Juggernaut clearly in its small minds senses the damage Blood has sustained due to its Malfunctions is enough to finish the job and it does so with a horrendous roaring sound as it splits Blood in half.

It advances forward as the representative of the Skarrd faction. 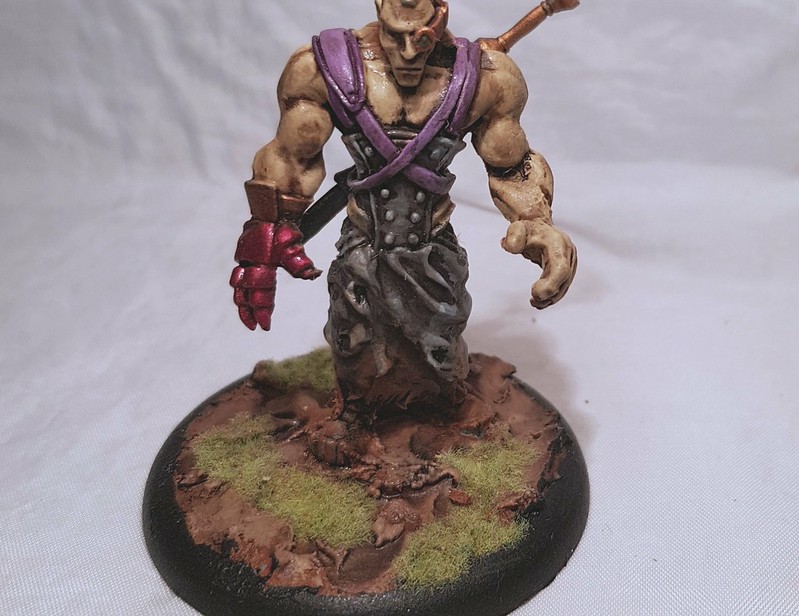 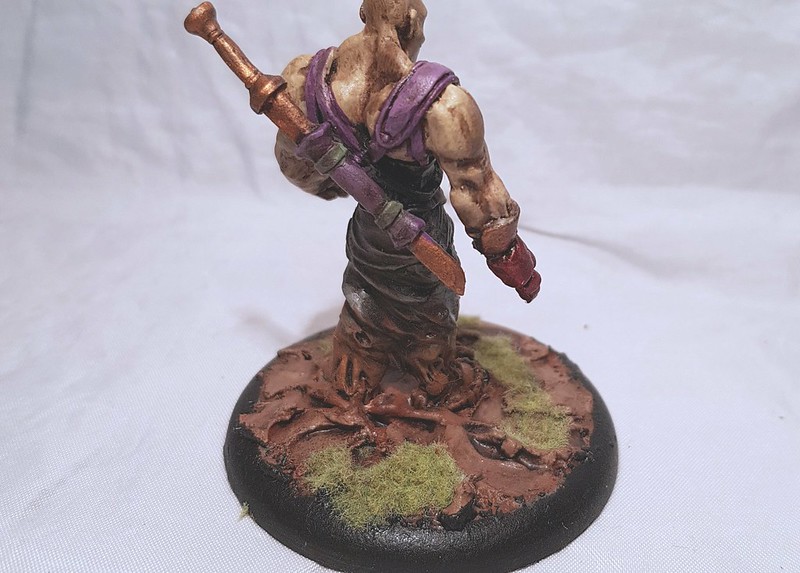 Very static model but nothing a little skirt wont fix. actually pretty fun to paint though. 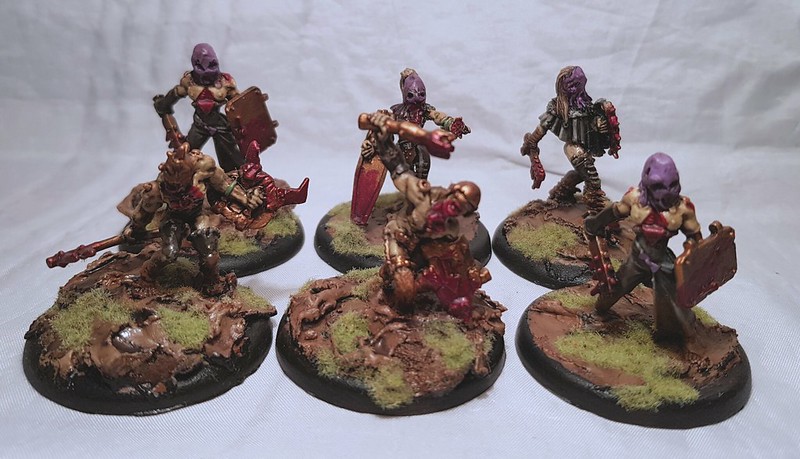 Yes they are old, old models but I do like them and with some GS I have some gimp masks for the foot clan 😉 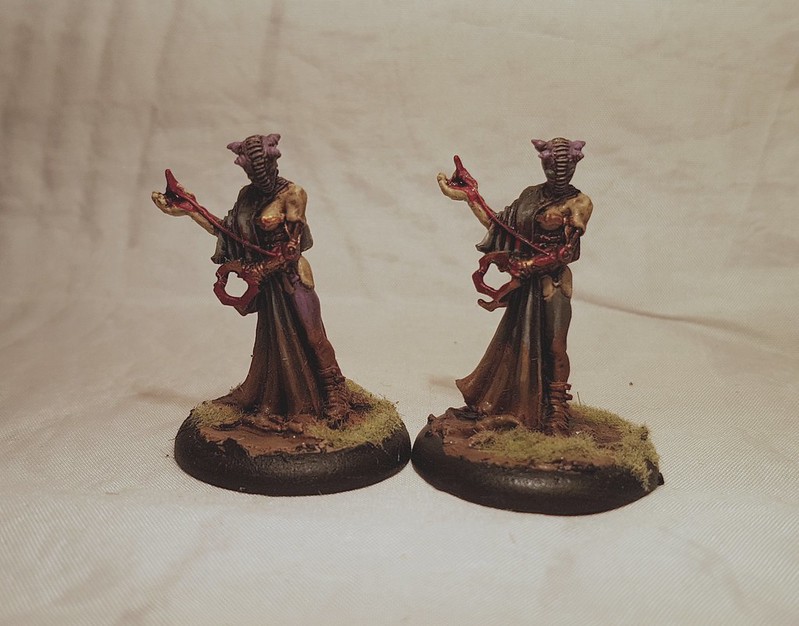 Everyone needs a hand in Dark age and well, what better way than making your own right? 😉 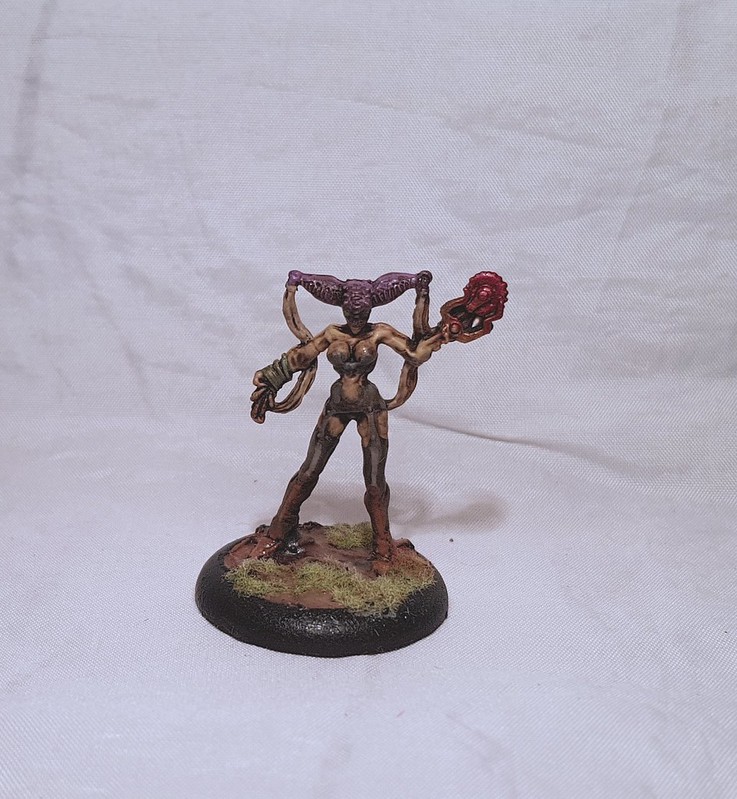 Another member of the horde that is the Foot Clan of Skarrd is here. Everyone needs a sister and one that ‘encourges’ other models is always handy! 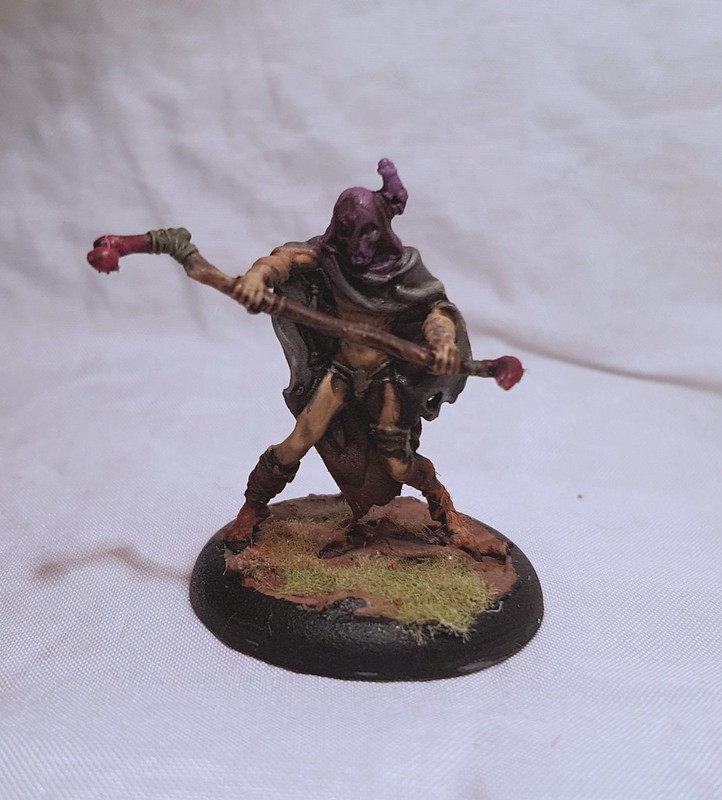