So Mr Steele was at it again and sending me shiny things to make me only want to play Dark Age…Should start calling him Siren Steele!!

Anyway, what I have in my hands is the new Secondary Objective Deck which adds some flavour to the objectives in your game. 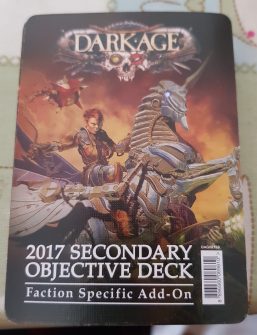 The deck is the same quality of the 2017 secondary objective deck for those that have it. For those that are cheap like me and use print outs they are nice and you are missing a trick..

What does the deck bring to us then? Each faction, not sub faction just parent ones get 4 new secondary objectives to add into their deck.

On first inspection there is nothing that all the different sub factions should be able to do, so no-one gets a penalty for taking them in. They all have some nice names so of the CORE ones are my favourites.

I think overall this is a great idea and adds some faction flavour to your secondary decks. Are they easily/harder to do than other standard cards no not really as the spectrum of difficulty is so vast anyway between the cards (and factions) means they are just nice to have. Pick them up and give them a try, the only thing I would have liked is the ability to select the cards you want to buy as there are some factions I don’t play (although I have lots of friends all of a sudden even a Brood friend 😉 ).