Welcome to the latest review, this time we are going to be looking at the Roots of Magic game. 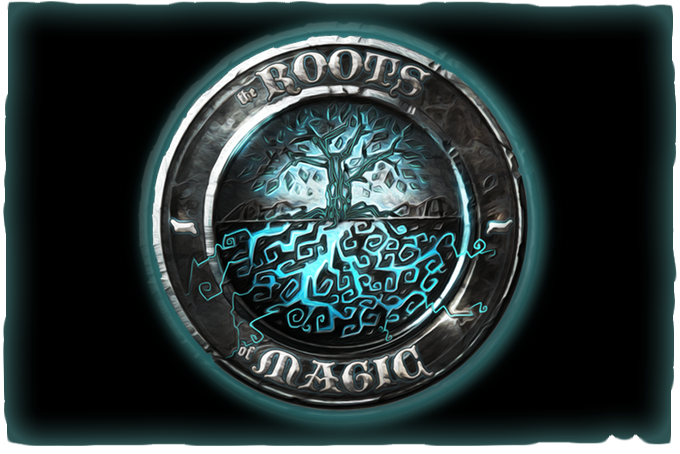 This is a really interesting game as the developers are taking a very slow and steady growth for the game.

Yes, eventually we are going to see a skirmish game emerge but at the moment we have a very small game which is going to be great to round out a gaming night when you have some spare time or just fancy something quick! Why this is, well we are going to be doing some Wizard duelling . Yep its time for some one on one fireballing 😉

The fluff is based around a world of magic (go figure) in which the power that Wizards can use is drawn from the roots of the World Tree. These ‘roots’ are everywhere on the world (called Mellorian). With each of these roots being a different type of magic, this means we have different  magics and as such different houses of magic (the factions).

If you want to read more there is plenty on the website.

They look amazing and you can go to town on them as you only have 1 wizard 🙂 stay tuned for model reviews coming soon.

Only a pdf at the moment but it wont be too heavy to print out as it only comes in at a super light 30 pages. It is well laid and as a bonus it is a living rulebook, so changes are going to be easy to keep on top of but most important its FREE!!!! 🙂

There are ranks in the game but currently we only care about Wizard level. Check out the Kickstarter which introduces the Acolyte level, which also increases the model count to 2. Premeasuring is allowed, which is very much the norm these days and makes sense you don’t see many wizards guessing how far to throw a spell!

The game is played on a 2×2 board but as part of that there is a duelling circle (12”) in centre of the board. Where I would imagine is going to see a good chunk of the action. Unusually the game uses D10s which is something I haven’t seen too much off, but more dice isn’t a problem.

The stats of a character are spread a couple of headers, we have the character cards then action cards which hold abilities/attacks for the model.

So what stats do we have then?

Rolling under the models Will minus 2 then they keep fighting on 1 wound, which is great idea as lets face it who hasn’t met a wizard who refuses to admit they got beaten.

All models have a Zone of Control (ZoC) which is 1” around the model anyone can enter this but if an enemy leaves the ZoC then you get a free attack against them as they leave. (As expected you can’t charge while in an enemies ZoC). You may also make ranged attacks in the ZoC but suffer a penalty for doing so, but you can’t target an enemy while a friendly model is in their ZoC.

Before going into the action cards a quick look at how you go about doing them, models generate Mundane Action Points (MAPs) and Power Tokens (PTs) that you can spend during their activation.

All models get 3 MAPs per activation and this is standard for all models, while Power tokens are variables and can vary from turn to turn but only to a maximum allowed on the model (Power Limit).

During a models activation the MAPs must be spent before PTs can be spent. This means that as you go through your activation you can do up to your 3 MAPs and whatever PTs the model is storing, you can however spend a mix of these if you don’t have enough MAP to cover the cost.

The type of actions are what we would expect really;

These contain the abilities/attacks for a model both types follow the same layout for ease of use. So what do we see with either of these action types?

A single number [2] is the cost of points be it MAPs or PTs to use.

While [2/3] means that you most spend 2 points to activate the action but you most also have at least 3 points left on the model after the initial spend as a ‘store’. This is a way of showing a wizard storing energy to keep the action going

In Roots of Magic you can aim an attack at an opponent and it could range from a tickle to taking an arm off this is based on the number of successful hits that are generated. There are 4 levels of damage from attacks so the level of damage is capped in the game so even when dice spike it wont change the game on a single roll.

So each attack does a set amount of damage seen in the description of the attack, we then get bonus damage based on the number of hits.

So you roll really well you can a decent bonus but you are not going to evaporate a model on one attack.

Are what you expect in a game:

Nothing to stressful here and all makes sense.

Terrain features in the game are you would expect in any game (not broken don’t fix). So we have the usual broken (rough) ground  to dangerous and also hazardous ground.

While we have Levels of terrain for cover and LoS purposes and the terrain offers the usual effects we see such as cover being harder to hit and slowing down on the broken ground.

What is interesting is this is the handling of cover as it grants a condition to the model. This ties everything up into a set of rules which I sort of like. I havent seen this sort of thing before but feels pretty intuitive.

So Power Tokens we have seen are important as they are a variable in the game resourcing of what a model can do BUT how do we get them?

Nexus Points – These 40mm markers are placed depending on scenario. They block movement (unless you can fly) for models and count as terrain for placement of in-game effects. Basically we are talking big magic rocks

The models then have Source Stones, about their person (except House Qing and the Diabolists, they have other means) which are really just amulets/rings etc.

These allow the models to access the Nexus points, Wizards and Acolytes can use Greater stones while all over model types are stuck with the standard less shiny ones.
What this means in-game is a model gains a power token a turn regardless of position on the board. However if near a Nexus point they can draw additional PTs from it depending on the scenario (standard is 2).
The standard stones can also do what greater ones can do but the model needs to be base contact with the Nexus point to gain the additional PTs.

So you have this balancing point leave your Nexus Point to go smash face BUT then the next turn you are going to maybe not be as productive as you have less PTs or if you can push an enemy away from their point to mess their plans up. It’s an interesting rule and will be another layer of tactical placement of models.

Lots of attacks/abilities can hand out Conditions onto the target; all these conditions are cumulative IF applied several times.

There are the usual debuffs and buffs you would expect from slowing models down to making them re-roll etc. there is even a transmute condition which I want to see in action 🙂

There are a few options but I wont go into them, could talk for days..

A great little game that nicely sits in a place that would be held for a quick card game.