A slow week this week with an out of sorts cub being disruptive hobby time has been a little slow, so don’t expect this to be a long post 😉

It would be rude for  me not to mention all the goodness coming of the HH weekender, alas I couldn’t go so my thanks to Recalcitrant daze blog  for the pictures. I am only going to cherry pick the bits I like for this rather go through all the pictures I am sure you have already seen.

So I am liking the Mechanicum army stuff more and more. I can see this being more popular than the legion stuff soon 😀

So we don’t get a name yet but from the looks of things it is a land raider without any transport capacity! It is certainly looking pretty nice, I wonder if you will need the next book to have the rules for it…..mmmmh!

The Emperor’s Childrens Primarch is certainly a nice looking model but I have to say I love that base! I would love to see a size comparison between him and Angron and he does look a lot smaller to me, although still very imposing!

I know I moan a lot about KS and its use by some companies. However when I saw this one LINK. I may have given in just a touch. The Ork player in me just had to have some of their gun platforms for Zzap guns and the like 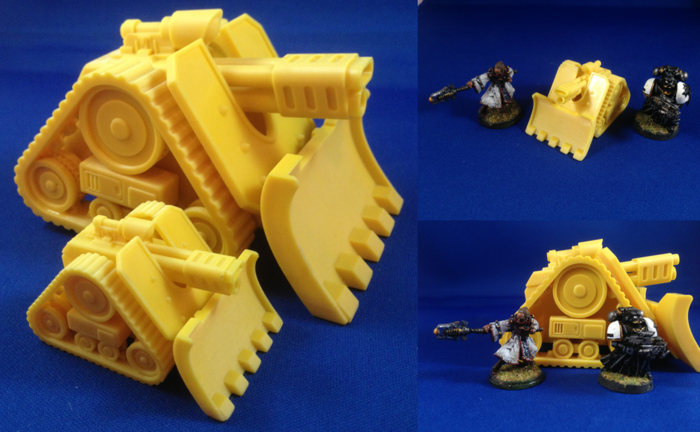 So with still some time left on the KS and one of the early bird choices still active and the idea of 3 of these guys for £10 sits with me very very well. Am I cheap you bet your bottom dollar I am 😛

Any one else do this?

This thing is NUTS I love it, silly and over the top doesn’t even begin to explain it…..All I can say is I want one 😉

As far as spoilers go we have the ‘Launch Servitor’ ability, which sounds to be something akin to the Stormwall and his pods and trolls with whelps. What is interesting is yo can pick which type of Servitor you are getting that round and it can still activate means those little guys have a decent threat range themselves.

On top of an apparent large amount of shooting with ‘Accelespikes’ and two yes TWO tow cable drags which lead to some free melee hits before buying more. He certainly has the look of being able to be as popular as Stormwall and Galleon!!!

It would be wrong of me not to mention the new Eldar! I don’t mind the new kits and the Wraith Knight is certainly impressive but I cant help but think we may see Apocalypse models making more of an appearance in normal 40K in a similar vein to what is seen in the 30K rules with the idea of ONE and only one ‘Lord of War’.

But my over bearing thought is where are the new aspect warriors I had so hoped for plastic aspect warriors. This is probably a good thing as I may have band-wagoned for them if it had happened :S

So I have been busy when given a chance to get some more Skorne and Orks painted. I have also been toying with ways to make a scratch built Shokk Attack gun just because 😀

I am also in the process of thinking of ways of making my Daemons all Tzeentch themed, so watch out for a post about that.

Until next week – As always any suggests/comments welcome and if you want me to cover anything let me know, as always see you hopefully next week.